HRH The Princess Royal has visited the Withywood area of Bristol to officially open Merchants’ Academy Primary and Venturers’ Academy.

As well as meeting staff and pupils, the Princess was given a tour of the new buildings where, much to the delight of pupils, she spent time in several classrooms. The Princess also listened to a joyful musical performance given by 14-year-old Venturers’ Academy student Lakhile who played the keyboard.

Lakhile said: “I’m so happy that I could play music for Princess Anne today. She asked me if I like my new school and I said that I love coming here every day!”

Merchants’ Academy Primary is located on the campus, with 391 pupils aged between three and 11. The school serves the Withywood and Hartcliffe area of Bristol, one of the most disadvantaged wards in the UK. The new-build primary school is part of the-all age academy and is now situated next to the secondary school and sixth form, having moved last year from its previous site on Withywood Road.

The primary school has 14 classrooms, a dance studio, an art/design/technology room, a spacious hall and a library. The special school includes a sports hall, science lab and rooms for art and design technology, life skills and music, as well as classrooms, therapy rooms and multiple breakout spaces.

The site also incorporates the Bradbury Centre, a specialist training hub located within the new Venturers’ Academy building. Funded by a generous charitable donation, the centre has been specifically designed to provide professional training to teachers and therapists who specialise in supporting young people with complex educational needs.

Students Poppy Selby and Nikolas Govedarcia, both age 11 from Merchants’ Academy Primary were thrilled to welcome Princess Anne to their school today. Poppy said: “It was so exciting to show a real-life Princess around our new school,” and Nikolas added: “Princess Anne really liked it here, I hope she comes back to visit us again!”.

Venturers Trust’s Executive Lead for Primary Schools, Trystan Williams, said: “We’re ambitious for all our pupils and we want them to succeed. The children here in South Bristol have so much potential and they are thriving in these wonderful new school buildings. Welcoming Princess Anne today has been so exciting for the whole school community, it’s been a very special day that we’ll be talking about for a long time to come!” 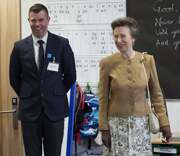 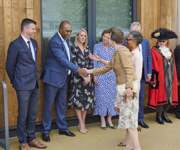